You can’t keep a good (young) man down! 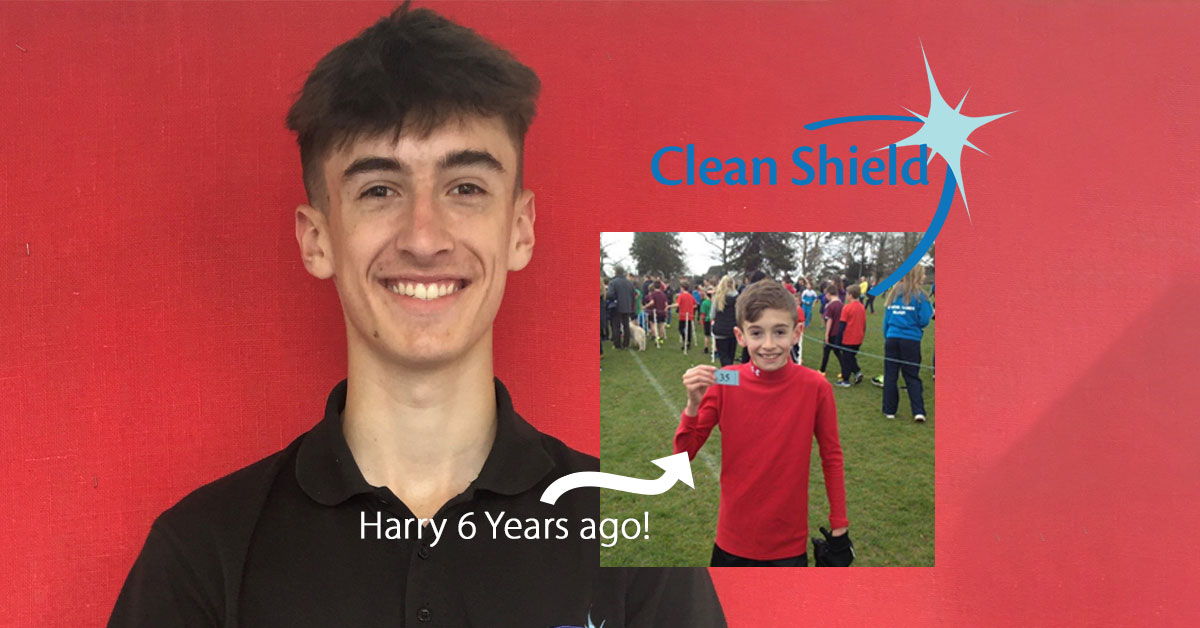 The saying goes “You can’t keep a good man down”, and this is definitely the case with Harry.

Harry, is the son of Clean Shield Operations Manager, Terri, and the last time we blogged about him was in March 2015 in what has become quite a prophetic blog entitled “Harry a future winner in the making”,  where we talked about 10 year old Harry’s prowess in all things “Sporty”.

Fast forward 6 years and the now 16 year old Crypt School pupil, Harry, has been fulfilling his potential, not only on the sports field but academically as well.

Football was and still is his main sporting passion, and all Harry’s hard work on the field was paying off, with county schools’ appearances and training with first division Cheltenham Town FC, until a nasty injury in March this year resulted in Harry breaking his leg in two places causing severe damage to his knee.

Not one to let what could easily be described as a “catastrophic” injury dampen his mojo, Harry has been keeping his spirits up by focusing his energies on his GCSE’s and recovery exercises.

With his exams completed, and 4 months before he returns to sixth form at Crypt to study for his A levels, Harry approached Clean Shield MD Kathy Price to ask if there were any part time positions available at Clean Shield for the summer months.

Kathy, who is always happy to help anyone who shows initiative, found Harry a position helping with the day to day cleaning at Kingsway School.

Since starting his new role, Harry has continued to impress, with Tarren, Clean Shield Supervisor at Kingsway, having nothing but praise for his “can do” attitude and willingness to lend a hand wherever it is required.

This level of commitment and responsibility has recently led Harry to be asked to join the Clean Shield Deep Cleaning Team on several “Covid Deep Cleans”.

Clean Shields MD, Kathy Price, said “It is always satisfying to see someone flourish and succeed, especially when they have had the tenacity to ask for a chance in the first place. Well done Harry Keep up the good work it will put you in good stead for the future.

I have been so impressed with Harry’s drive and commitment that anyone who is looking for part time work with flexible hours to fit round their studies can always give us a call and we will see what we can do. It’s a good start to employment and if you work hard, you can gain yourself a good reference for the future”.

All in all, this blog proves you really keep a good (young) man down!

This website uses cookies to improve your experience while you navigate through the website. Out of these, the cookies that are categorized as necessary are stored on your browser as they are essential for the working of basic functionalities of the website. We also use third-party cookies that help us analyze and understand how you use this website. These cookies will be stored in your browser only with your consent. You also have the option to opt-out of these cookies. But opting out of some of these cookies may affect your browsing experience.
Necessary Always Enabled

Performance cookies are used to understand and analyze the key performance indexes of the website which helps in delivering a better user experience for the visitors.

Analytical cookies are used to understand how visitors interact with the website. These cookies help provide information on metrics the number of visitors, bounce rate, traffic source, etc.

Advertisement cookies are used to provide visitors with relevant ads and marketing campaigns. These cookies track visitors across websites and collect information to provide customized ads.

Other uncategorized cookies are those that are being analyzed and have not been classified into a category as yet.