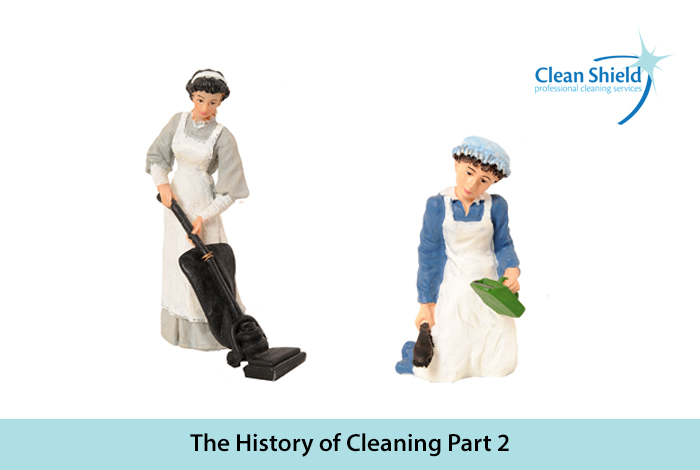 So we arrive in the 20th Century for part 2 of our brief look at the history of cleaning and housework.

Although the first gas cookers appeared in the 1890s and electric ones followed shortly after, the first going on sale in 1893 in the UK, they did not become popular until the 20th Century. By 1939, there were some one and a half million electric ovens in Britain and around 9 million gas ones.

Convenience foods in bottles and jars also helped make cooking easier. Fridges, freezers and microwave ovens all improved life in the kitchen as the century wore on.

The first electric washing machine made an appearance in 1907, becoming common during the 1930s. They were relatively expensive, however, and did not become a common sight in British households until the 1960s.

1901 saw the emergence of the first powered vacuum cleaner, invented by Hubert Booth. His first model was actually petrol driven and was so large it needed to be pulled through the streets by a horse. It parked up outside a house and the hoses were fed into the property through the windows.

The first portable electric vacuum cleaner was invented in 1908 and by 1959 some two thirds of British householders had one as they became more affordable. James Dyson patented his first bag less cyclonic vacuum cleaner in 1979, with it going on sale in 1993.

It was not until 1950 that a Canadian, Harr Wasylyk, invented the bin liner or garbage bag.